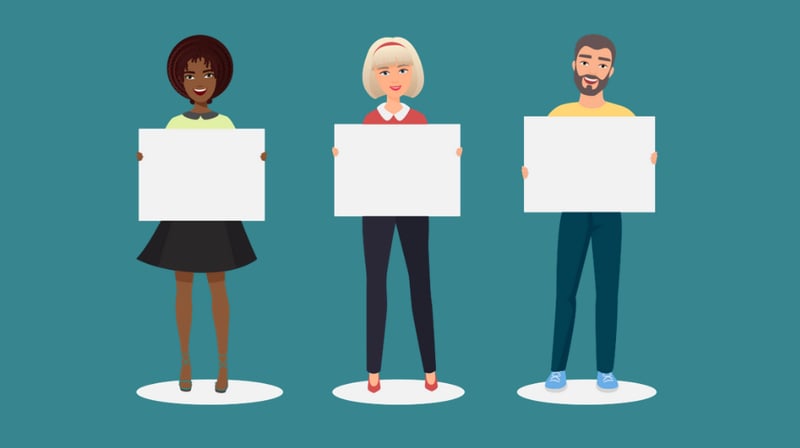 Our students and society need us to prioritize anti-racism, and in a previous post, I detailed three ways for student affairs professionals to be anti-racist.

Being anti-racist requires a lot of work on everyone’s part, and that work should start with written statements about the institution’s commitment to anti-racism.

Not only do our institutions as a whole need to commit to being anti-racist, but we also have a responsibility to make sure that our divisions, departments, offices, committees, and student groups are committing to anti-racist practices.

Your institution may have already released an anti-racist statement, but as student affairs professionals, we need to think deeply about anti-racist messaging in our own areas and commit to pushing for change.

So, here are four important components that are vital for creating an anti-racist statement that is sincere, impactful, and transformative.

Acknowledgment is the first step in creating an anti-racist statement. An effective statement acknowledges at least seven things:

We need to clearly define racism, emphasizing that it encompasses more than just racial prejudices; racism also involves social, institutional, and systemic powers. (And yes, there are differences between systemic, systematic, and institutional powers).

To prove this, you can point directly to climate surveys put forth from your institution or highlight concerns expressed by student organizations. You can also share general studies about racism in institutions of higher education or statistics related to recruitment, retention, or satisfaction of students, staff, and administrators of color.

2. Racism is both conscious and unconscious

We need to highlight that members of our communities (including ourselves) have internalized many stereotypes, biases, myths, and conditionings that lead to both conscious and unconscious prejudices and racism.

The University of New Hampshire Social Work Department’s anti-racist statement does a good job of acknowledging the severity of racism, highlighting how racism can be unconscious or unintentional.

“We acknowledge that racism can be unconscious or unintentional, and that identifying racism as an issue does not automatically mean those involved in the act are racist or intended the negative impact.” — from The University of New Hampshire Social Work Department’s anti-racist statement

3. We need to validate and affirm members of our communities

Our institutions have often failed to recognize the experiences and occurrences of racism that our own students, staff, faculty, and other community members have endured. So, we desperately need to explicitly state that our groups, departments, and offices know that racism is a harmful problem. Additionally, we must admit that we should have done a better job, both recently and historically, of acknowledging and combating racism.

Note: I will capitalize White here and elsewhere because, as sociologist Eve Ewing explains, White is a “specific social category that confers identifiable and measurable social benefits.”

However, our understanding of White supremacy has to be from the critical race viewpoint, which defines it as a “political or socio-economic system wherein White people enjoy structural advantages and rights that other racial and ethnic groups do not, both at a collective and an individual level.”

We cannot separate ourselves from White supremacy. We must recognize it and acknowledge that there are structural advantages put into place by and for White people throughout our society.

As educators, it is especially important to note that White supremacy can be driven by race-neutral policies. Such policies do not explicitly consider or mention racial classifications, yet they can either intentionally or unintentionally impact people of one race differently from people of another.

For instance, drug laws don’t explicitly mention race, yet it is well-documented that Black people in American are punished more severely than White people for drug crimes — despite both groups selling, buying, and using illegal drugs at around the same rate.

Often, there is an assumption that race-neutral or race-blind policies are equitable. But, unfortunately, that idea ignores our history of White supremacy. White people in America have enjoyed structural advantages and rights for the entire duration of US history, so making a policy race-neutral in the present does not address past harms.

In a 1981 interview, Lee Atwater, a political strategist for the Republican Party and advisor to Ronald Reagan and George H.W. Bush, illustrated exactly how politicians like Reagan used race-neutral policies to perpetuate White supremacy when he said:

“You start out in 1954 by saying, [the “N” word]. By 1968, you can’t say [the “N” word]—that hurts you. Backfires. So you say stuff like forced busing, states’ rights and all that stuff. You’re getting so abstract now [that] you’re talking about cutting taxes, and all these things you’re talking about are totally economic things and a byproduct of them is [that] Blacks get hurt worse than Whites.”

Atwater admitted that this country, particularly the politicians he advised, has continuously put policies into place using abstract terms, and an intentional byproduct is that Black people are hurt worse than White people.

This trend occurs within every facet of American society, including higher education, starting from the admissions process.

5. Systemic racism exists, and we must distinguish intent from impact

It is important to note in our statements that racism affects us in every facet of life, especially in education, economic, and criminal justice inequities.

As Lee Atwater pointed out, the intended byproduct (or impact) of many racial-neutral policies was to harm Black people more than White people.

As educators, we have to be prepared to look at our systems and policies in place today. Perhaps we don’t intend to harm people, but we still need to examine the real intended and unintended impacts of those policies.

Are we maintaining the status quo and inhibiting others through our policies? We have to reevaluate all of our policies and procedures to make sure that we are being inclusive, equitable, and accessible. We have to consider race-conscious policies in order to begin to fix racism in higher education.

6. It is not the job of the oppressed to teach the oppressors about their mistakes

Audre Lorde, writer, feminist, womanist, librarian, and civil rights activist, points out in “Age, Race, Class and Sex: Women Redefining Difference” that those who are oppressed often have to be “watchers” and become familiar with the language and manners of those who are oppressing. She also points out that, when the time to communicate happens, “those who profit from our oppression call upon us to share our knowledge with them.” 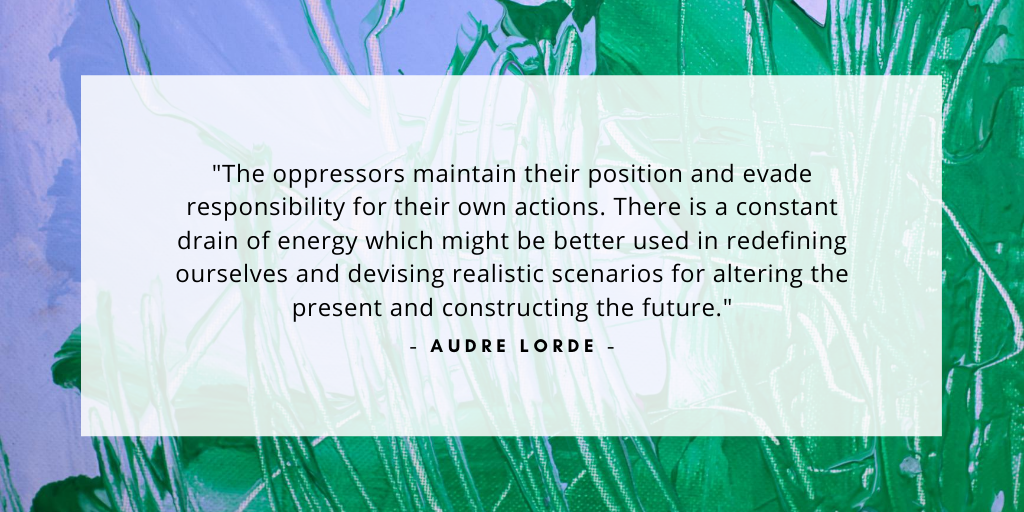 It is important for your anti-racist statements to emphasize and call out this dynamic and highlight the labor of those who are oppressed. You can do this by stressing oppressed folx have been doing anti-racist work for years, and any work that is done by a group, committee, office, or department is based on the foundational work of these folx.

The College of William and Mary’s Department of Anthropology’s anti-racism statement highlights history, the role that systemic racism has played in the field of anthropology, and the work of the college’s staff.

7. You must admit where you have gone wrong and emphasize that there is no excuse for inaction

Additionally, we also need to make it explicitly clear that there’s no excuse for past or present inequities. Our institutions have been creating and maintaining inequities for far too long, and there must be atonement.

Additionally, our institutions need to talk about the costs of those wrongs. For instance, Georgetown University has documented that 272 enslaved people were sold in 1838 to help maintain the school.

That should be a conversation that every institution is having. And specific divisions, departments, and groups also need to be thinking about how they have harmed folx recently and historically.

In anti-racist statements, groups should be prepared to explain:

In addition to making all of the above acknowledgments, anti-racist statements must specifically pose a challenge to address and disrupt racism, accompanied by action.

The challenge can be general. Your group should challenge themselves to address and correct inequities.

The challenge can also be specific. Your group should challenge its entire community to address policy inequities related to areas such as recruitment, retention, inclusion, and belonging.

Additionally, the challenge should be to prioritize diversity, equity, and inclusion, while announcing the expectation of a commitment from students, staff, faculty, and administration.

Reed College’s anti-racist statement has an expectation that every member of the community combat racism, and it points out specific areas and policies that must be addressed. 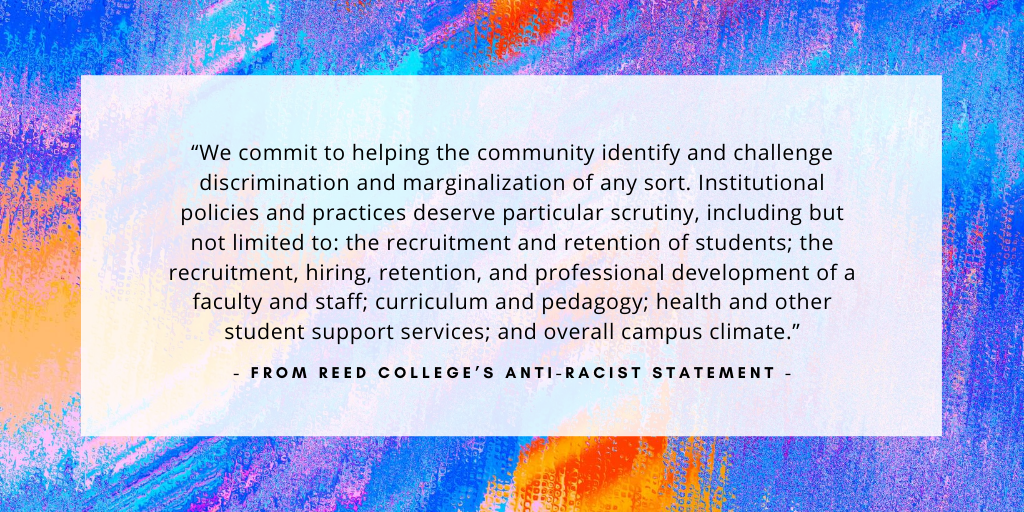 Finally, as important as it is to highlight what you’ll do, make sure you also disclose how your department, organization, or group will complete these actions.

The final component of an anti-racist statement is accountability. All of the other components I’ve mentioned are meaningless without it.

Your anti-racist statement needs to outline how your institution (or office) can be held accountable. It should outline who will spearhead initiatives and how much money and resources will be committed to the action. It should also establish which groups will be undertaking which tasks, and ultimately, the reporting structure that will be put into place.

Additionally, there needs to be accountability within the broader institution. Your statement should make clear precisely how students, staff, faculty, and administration will be accountable for failing to take concrete, proactive, and continuous anti-racist actions.

For example, your statement should answer some or all of these questions:

All of these questions are examples of how you can make sure that the individuals who make up your institution are held accountable for doing this work.

Anti-racist messaging is so important for institutions. As student affairs professionals, we can play a major role in making sure that we are communicating exactly how dedicated we are to anti-racism. And when done well, anti-racist statements allow us to convey our awareness of the past, our actionable steps in the present, and our interest in restitution and repair toward creating a better future.

Do you have an example of a great anti-racist statement? Tweet us at @themoderncampus and @Marcelius_B. 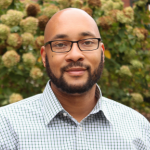 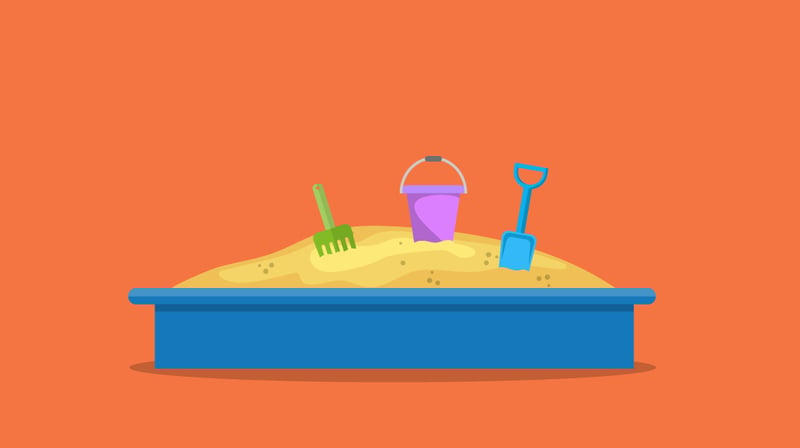 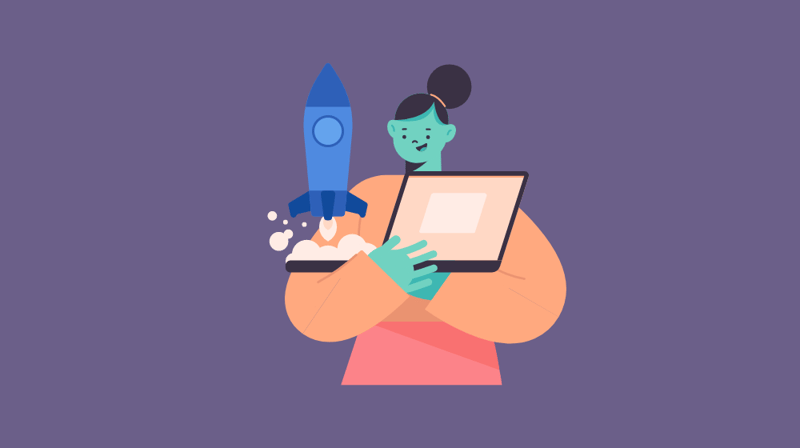 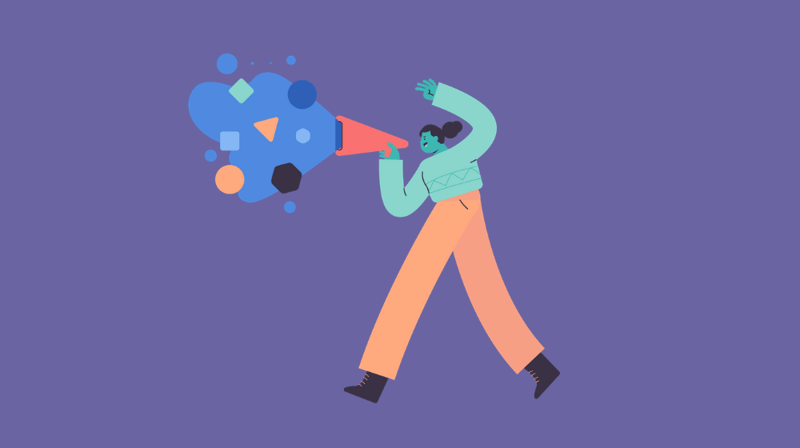 4 Ways to Apply Your Anti-Racism Efforts to Virtual Environments 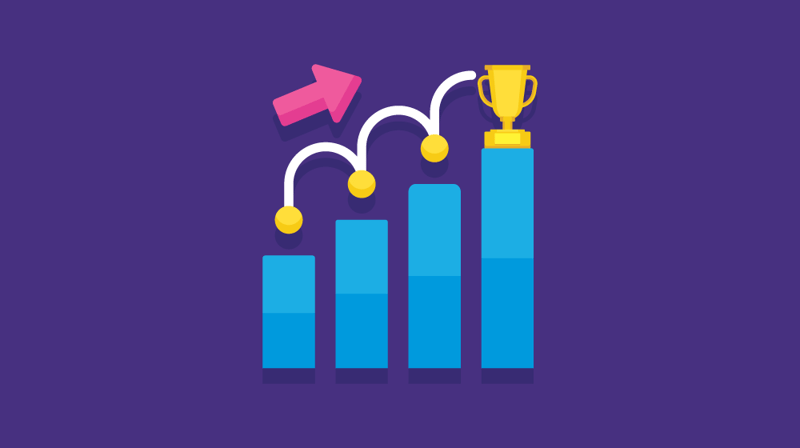 How Data Can Help #SApros Improve Their Co-Curricular Courses & Workshops